Patrons Under the Influence of Drugs: What Libraries Can Do About It 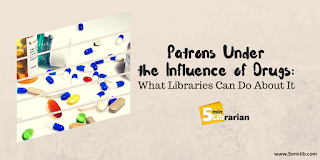 One topic you don't hear too often is what to do about patrons who come in under the influence of drugs. At our recent YA Collaborative Group meeting, we invited two Community Police Officers to talk to a room full of teen and youth librarians about this important topic. They shared some great tips that I'd like to share with all of you, too.


"Prescription opioid overdoses now kill more people in the United States every year than all other drugs combined, including illicit drugs. Collectively, drug overdoses are now the leading cause of death in the majority of states and kill more Americans every year than car crashes." (ncsl.org, 11/24/2015)

2. Partner with your community officers or school resource officers.


4. What to do if someone in the library is experiencing (or appearing to experience) an overdose:


5. Behavior you should look for if you suspect someone is dealing or hiding drugs:


Special thanks to Amanda Maclure for taking such great notes at our YA Collaborative Group Meeting and letting me use them here. Also, thank you to our local police department for coming out and talking to us about this.
Posted by Jess at 4:07 PM