An amazing new trend has been popping up in libraries across the nation. Librarians are ditching their fiction's author alphabet system for the new and improved Aesthetics System. 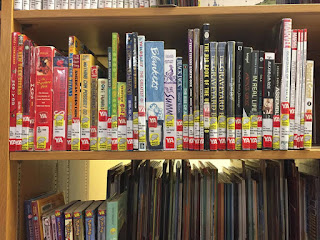 We were intrigued, so we went to our local library to see how it works. The Head of Circulation, Mr. Roy G. Biv, was very willing to meet with us to discuss the changes. "We had so many patrons asking us if we remembered that book with the blue cover," Mr. Biv said. "We realized that maybe we were using the wrong organizing system. If people remember colors best, maybe we should be shelving that way. So, we reshelved the whole fiction collection by color and size."

The result was a major success!

Here's what they learned:


It did take a while to get librarians on board with the changes, but they were converted when they saw the upsides:


There were definitely a few challenges to this new system:

"No system is perfect," Mr. Biv conceded, "but this new system has stopped patrons asking us, "Do you know that book with the blue cover?" We do; it is in the blue section."

With the success of the Aesthetics System, Mr. Biv's staff has been motivated to change the nonfiction collection. Stay tuned for our next article titled, "Ditch Dewey, Try Pictographs!"

Email ThisBlogThis!Share to TwitterShare to FacebookShare to Pinterest
Labels: Jess