Presidential Budget Cuts, and How They Could Impact Libraries 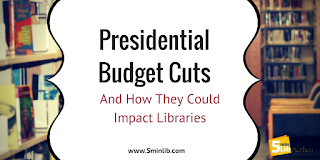 Politics, right? We're all tired of hearing about it, debating about it, and fighting about it, but it's so important that we're gritting our teeth and bearing it. We here at the Five Minute Librarian try to be non-partisan, but this is one issue on which we can not remain silent. No matter what side of the political fence you stand on, if you're in the library world, this one will affect you.

Here, as best as we can muster, are the facts of what's going on, and reactions from Julie Todaro, the President of the American Library Association; Greg Pronevitz, Executive Director of the Massachusetts Library System. (Note: We reached out to MLS because Five Minute Librarian is based in Massachusetts, but it's likely that your local libraries will face similar cuts.)

President Trump has proposed that the budget for the Institute of Museum and Library Services will be eliminated. Not just cut back - entirely gutted. The IMLS is the primary source of federal support for the United States' 123,000 libraries and 35,000 museums. This is $230 million of federal funding that, if this proposal passes, is going to vanish. (This does not include the budgets for the National Endowment for the Arts, the National Endowment for the Humanities, and the Corporation for Public Broadcasting - which will also be completely gone.) You can read the official IMLS statement of response here.

The Institute itself was founded in 1996, but the first federal library grants were given in 1956 (it was part of the U.S. Department of Education back then). There is a long history of federal help to libraries, and we have come to not only rely on the assistance, but, through years of experience, really make the best possible use of the funding.

In addition to the Grants to States Program, one of the biggest cuts will hit the Library Services and Technology Act, funded annually to help libraries provide updated technology, technology training for library patrons, professional development for library employees, assistive technology for patrons with disabilities, and other uses as outlined in the LSTA Grant Priorities and Purposes Guidelines. (Side note: My library had a LSTA Grant last year, and it was incredibly helpful to us, when we had little budget allocated for technology or training.) It has literally helped millions of people.

In an official statement to the press, Julie Todaro, President of the American Library Association, called the proposed budget "counterproductive and short-sighted." The ALA plans to get us - librarians, library users, and the Congress itself - riled up and prepared to fight for what we believe in. She said, "America's more than 120,000 public, school, college and university and many other libraries are not piles of archived books. They're trusted centers for education, employment, entrepreneurship and free inquiry at the core of communities in every state in the country – and in every Congressional district. And they’re staffed by the original search engines: skilled and engaged librarians."

I was lucky enough to be in contact with Greg Pronevitz, Executive Director of the Massachusetts Library System, so we could learn his views on the subject. His words have been included here.

My take on the President¹s proposal to eliminate funding for the Institute for Museum and Library Services ... is that it will be extremely detrimental to Massachusetts libraries.

Massachusetts is the beneficiary of more than $3 million in federal funds to support libraries.  These funds are used to support grants to libraries, funding for statewide databases and eBooks, as well as other operations and some personnel at the Board of Library Commissioners.  If IMLS and its funding end, a major reprioritization of spending would be required.  Many programs and services will be curtailed or eliminated. It is too early to provide details because MBLC and many stakeholders would need to be involved in the process.

If you want to support IMLS and its work for libraries, please contact your Congressman and Senators and let them know how important libraries are to you and your community.  Ask your patrons to do the same and tell a personal story about the library and ask their elected officials to prevent this defunding of IMLS.  Be aware that many programs and services are at risk in the President's budget and our elected representatives will be defending many cuts.  Please make sure that libraries are fresh in their minds during this process.  The more people they hear from, the better our chances of successfully supporting IMLS.


We also spoke with Deb Spratt, Library Director of the Lawrence Library in Pepperell, MA. She also mentioned a decrease in library services would be likely, and may include "decreases or possible elimination of databases, ebooks, and inter-library loan delivery services" provided by the state's Massachusetts Board of Library Commissioners and Massachusetts Library System. In addition, because those organizations are grant-funded, there would likely be increased membership fees for libraries to belong to consortia. When so many libraries still haven't bounced back from the budget cuts that happened during the recession, this may mean an increased number of libraries who can't belong.

(Note: In this state, most public libraries belong to one of several consortia. Membership means increased access to ebooks, the ability for patrons to use their library cards at many area libraries, and easier inter-library loan.)

What can you do?

This budget needs to be approved by Congress before it can be official, so there's some hope.  As Mr. Pronevitz said, please contact your elected officials and voice your concerns. Tell them stories about how libraries have made a difference in your life. Don't remain silent on this issue. Not sure who to contact? Many websites, such as votesmart.org, will be able to tell you all of your elected officials. It can't hurt to contact them all.

If you have the approval of your library director, you might be able to have postcards or letters pre-printed for library patrons to mail out, or perhaps a program about local (or not so local) politics. There is a sample letter on the everylibrary.org website that can be sent as-is, or used as an example for anyone who wishes to write their own.

It also can't hurt to post on social media, write letters to your local newspaper editor, and otherwise keep doing what you're doing - remind your patrons why what we do is so important.
Posted by Kat at 1:46 PM