8 Lessons Learned from the 2017 Eclipse

Last August, the hottest topic of discussion in the library world revolved around the 2017 Total Solar Eclipse. For many librarians, this was the first time that they held a library program connected to it and handed out special glasses to safely view the natural phenomenon. Now that we have survived this experience, it is time to take a step back and see how it went.

Mostly because, if you are in North America, another one is coming on April 8, 2024. Right in the middle of tax time, yippee! And for our international librarians, partial Solar Eclipses are coming in 2018 for South America, Antarctica, and Australia. The next total solar eclipse is coming July 2, 2019 for southern North America and South America.

So, what do we know now that we didn't know before that we can share with future librarians? 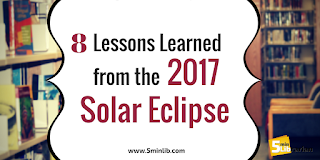 1. It Was Wildly Popular

When word got out that libraries had free solar glasses, libraries were inundated with phone calls and visits. (And, unfortunately, this was inaccurate information. Not all libraries had solar glasses.) Hundreds of people turned up at viewing parties. People were lining up HOURS early for the viewing program. It didn't matter to people if they were in an area with full coverage or partial coverage, this was a popular program all across the U.S. Many libraries were caught off guard when a surge of interest in the glasses appeared two weeks before the event. (However, it might be important to note that this year's solar eclipse was during summer vacation for most students. Many families made a special day of it and parents/care givers took off work to experience this special event together. If school was in session, I wonder how many parents would have kept their kids home.)

2. Desperation for the Glasses

It wasn't uncommon for libraries to receive over 100 phone calls in one hour asking about the glasses. Some patrons got ugly when libraries ran out or wouldn't hand out glasses earlier than the viewing event. There were bangs on windows trying to get staff attention when libraries weren't open to the public just to double check they were out. Some libraries asked for a $1 donation if they had paid for the glasses and people were willing to do that. This may have also worked as a Friends fundraiser for the libraries who can't charge or ask for donations.

3. Where did the glasses come from?

Some libraries were able to get grants for the glasses and bought their own from these reputable dealers. (Be wary about Amazon -- a few libraries were told the glasses they ordered couldn't be verified to be legitimate so their order was automatically cancelled.) Star_Net also gave out 2 million free glasses (and 4,000 educational kits) to over 7,000 libraries.

4. Might be a Great Way to Get People Back to Libraries

Some libraries required registration to participate to the viewing event and receive solar glasses. Others only handed out glasses to those with a library card. Many didn't require anything at all... So many pros and cons to each one. One county with four branches had 1,000 glasses. They only handed them out to card holders, so they issued 70 new cards, 7 reissued cards, and brought in $200 in fines. This event could have been played as a great registration drive the month up to the big day... Of course, if you only have a small amount of glasses, it may not be worth all the effort of requiring registration. Some libraries held an eclipse event/presentation a week or two early and handed out the glasses then to avoid the mad rush of people at once.

People were happy to share glasses! In fact, most people didn't stare at the eclipse the whole time, so it makes sense to stretch your glasses supply and only give out 1-2 per family (more if the family is larger), etc. And many people did share at the viewing parties, so don't feel like you need to limit attendance to how many glasses you have.

While the whole event happened over a few hours, there wasn't a lot of exciting things going on. You might want to encourage your patrons to bring chairs, blankets, and picnic lunches to help pass the time. This is also a great time for patrons to make pinhole projects, use a colander, wrapping paper tube viewer, and hear a presentation on eclipses. Some libraries tried to show live streams of the event on the NASA website which worked well for some, kept buffering for others, and, for a small amount, it didn't work at all. Some have found NASA's Facebook page supported the traffic much better than their website. One library gave out moon pies and Sunny D. Another library collaborated with the local Boy Scout troop who came to the library viewing event with their telescopes with special solar filters so patrons could look directly at the sun.

7. What to do with the old glasses?

There were so many things libraries could do with the old glasses. According to NASA, the ISO 12312-2 safety standard compliant glasses last forever if they aren't scratched, punctured, or torn. So, libraries could have collected the glasses back and saved them for a future eclipse. Or, they could have donated them to the Astronomers Without Borders who would send them to another country to be reused. For the ones that were damaged, the filters can be popped out and the frames recycled. Filters can be recycled as camera film, so you can contact a local camera shop.

8. What changes would librarians make for future events?

A) The clear response across the board was buying a whole lot more solar eclipse glasses - double to 5x the amount you expect. Again, this might not be wise if your solar eclipse is held during school hours, but this could also be a great opportunity to collaborate with schools.

B) People also talked about limiting glasses to only a few per family since it was easy for everyone to share. Others planned to keep more glasses on hand for their event since many people were willing to come to the viewing event.

C) There were also suggestions of getting porta-potties, offering food, telling patrons to bring their own chairs/blankets, and planning more events during the program.

D) The media also didn't always give out the correct information, so make sure to keep them updated with how your library is participating. If you are part of a library network, it might lessen confusion if you all agree to start handing out glasses on the same day, etc.

E) There are disagreements about whether or not a library card should be required to get the solar glasses. This will have to be for each individual library to decide. Some people felt it was a success just getting new people to walk into the library but others felt that it was a missed opportunity to get people to become patrons. (Some libraries were dismayed to learn people had driven long distances to visit them and get glasses because their own library was out or never had any.) One library not only made it a requirement to have a library card, but required that they checked out at least 5 items to earn their free pair of glasses.

F) Lastly, while the weeks leading up to the event might be insane, the day of the event has been very rewarding to many librarians. Coming together as a community to learn and witness a natural phenomenon was an amazing experience.

Many of the specific situations cited in the post above came from Facebook Discussions here and here last August. If your library participated, what did you learn from the experience?
Posted by Jess at 8:21 AM