Library Stories that Give us the Warm Fuzzies 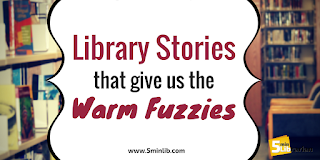 As the year comes to a close, we thought it might be a nice way to wrap things up by thinking of some library- or book-themed stories that gave us a warm and fuzzy feeling over the last year or so.

Of course, this is far from a definitive list! Please let us know what stories gave you the warm fuzzies this year by posting here in the comments, on our Facebook page, or on Twitter. 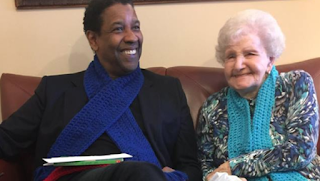 In December 2016, famous movie star and all-around good guy Denzel Washington took the time to go visit his childhood librarian for her 99th birthday. That blue scarf he's wearing? She knitted it for him!

When they spoke on the phone before the visit, Washington told her, “you don’t know how much you helped me. You helped me so much.”

Kat's note: I hope that when I am old and gray, I'll get visits from the kids I knew at the library. I don't care if they're famous, but I'd like to know they remember library visits fondly, and hopefully are still big readers and good people.

The link here is to the CBS News article; this photo is from the same article. Summer 2017 saw a new kind of library in Detroit, Michigan. Libraries Without Borders, along with many community partners, set up pop-up libraries in three laundromats across the city, complete with books, Wi-Fi access, laptops, and more. Their goal is to have libraries in every laundromat in the city.

The link here is to the Model D Media article; the photo is from the same article.

Barber Courtney Holmes has been promoting literacy by giving free haircuts to children who read to him while he works at his shop in Dubuque, Iowa.

Mr. Holmes told USA Today, “To be honest, I was amazed. The line started with four kids, and next thing I knew it was like 20 kids, all waiting for a haircut and eager to read.”

The link here is to an article from People Magazine in 2015; the photo is from the same article.

When four-year-old Daliyah Marie Arana read 1,000 books (as part of the 1,000 Books Before Kindergarten program), her mother contacted the Library of Congress - which is Daliyah's "most favorite, favorite library in the whole wide world" - and asked if she could visit. Not one to let an opportunity pass by, new Librarian of Congress Carla Hayden had Miss Arana come be a Guest Librarian for a day.

The link here is to the article from Smithsonian Magazine; photos are from Ms. Hayden's Twitter. 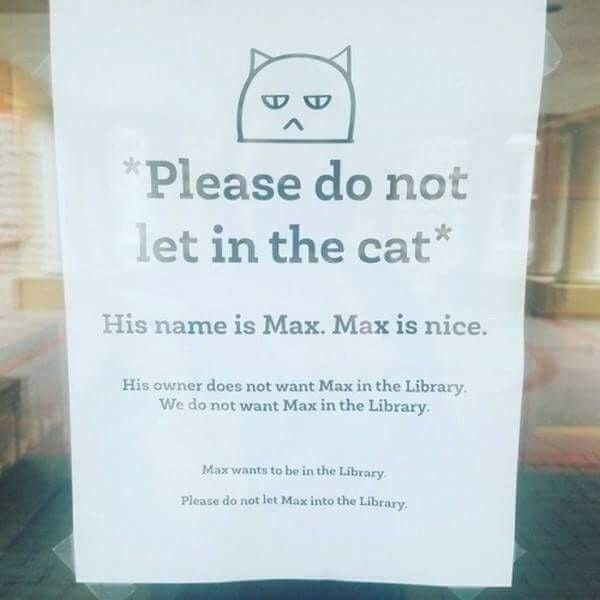 Max the cat is not allowed into the university library in St. Paul, Minnesota, but he desperately wants to be inside! There's even a sign on the door. After a library user posted a photo of the sign to Twitter in November 2017, the Internet exploded with support for Max - everyone wanted to let him in! Many Twitter users even wrote poetry about Max, including limericks, epic sagas, and (Kat's favorite) a take on "This Is Just to Say" by William Carlos Williams.

The link and photos are from an article from the Washington Post.

Browser, a long-time resident of the library in White Settlement, Texas, had been "fired" and evicted from his library home in 2016, despite having been adopted (or, hired) to take care of a rodent problem in 2010. Due to public backlash and international news attention, as well as a petition with over 1,000 signatures, and 1,500 emails from around the world, the city council unanimously decided that Browser could keep his job, after all.

The link and photos are from an ABC News article. 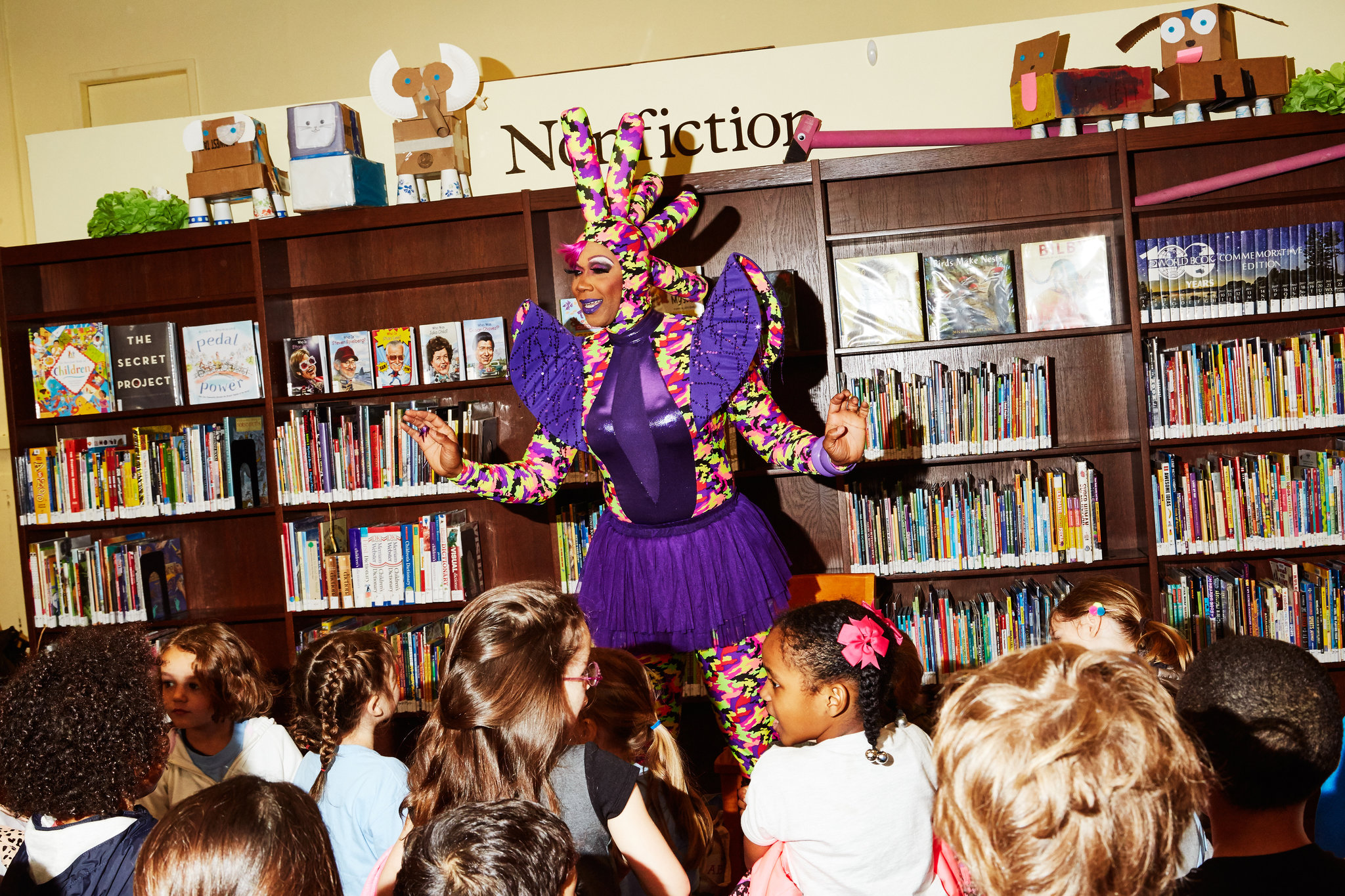 Drag Queen Story Hour started in San Francisco in 2015, and has spread across the country, with events also happening regularly in New York, Los Angeles, as well as several one-time programs in many different libraries across the country. Stories tend to be focused on the theme that "It's Okay To Be Different," and the feedback libraries have gotten has been overwhelmingly positive, with children especially loving their special guests. Not only has this brought the idea of inclusion to the library's youngest audience, but it also has reminded many of the happiness that story hour brings to families of all ages.

The link and photo are from an article in the New York Times; featured in the photo is Harmonica Sunbeam.

In most libraries, you can check out books and movies; in some, you can also check out humans and have a little chat! According to their website, "The Human Library™ is designed to build a positive framework for conversations that can challenge stereotypes and prejudices through dialogue." This program started in Copenhagen, Denmark, in 2000, and has spread across the globe since then. Have some difficult questions? Ask away! As the organizers say, "When you meet our books, no matter who you are and where you are from or which book you will be reading, in the end, inside every person, the result will say: we are different from each other, we see things differently and we live life differently. But there are more things that we have in common than are keeping us apart."

The link here is to an Upworthy article; the photo is from the same article. 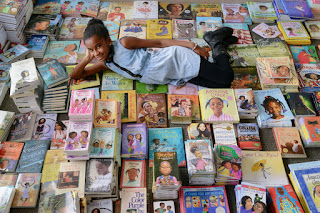 Even if you don't know her name, you have probably heard of Marley Dias's #1000BlackGirlBooks movement. In November of 2015, Dias started on her goal of collecting 1,000 books with Black girls as main characters to donate them to schools in need, at only 10 years old. Though young, Ms. Dias is very eloquent, explaining that the lack of diverse characters is what drove her to begin her campaign. "This gap hurts all of us...I’m working to create a space where it feels easy to include and imagine black girls and make black girls like me the main characters of our lives."

Marley has been named one of Forbes Magazine's 30 Under 30 - at only 12 years old! - and has an upcoming book about activism being published with Scholastic. She has also been interviewed by NPR, and met Ellen, Oprah, and Michelle Obama. The linked article and photo above are from Forbes Magazine. 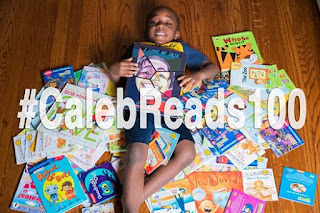 Four year old Caleb Green, who wants to be a  basketball player/astronaut/Ninja Turtle when he grows up, declared to his father one night that he was going to read 100 books. His father, Sylus Green, was not one to turn his son away from setting goals, and set up a live-stream so that Caleb could read aloud to friends and family.

Over 4,000 people tuned in to watch Caleb meet his goal. Go, Caleb!

According to the article, "the family stocked up on books from their own collection as well as from friends’ bookshelves" to find their 100; perhaps next time they will choose titles from their public library.

The link above and the photo are from the Huffington Post article.
Posted by Kat at 11:14 AM