How to Throw an Epic Library Party 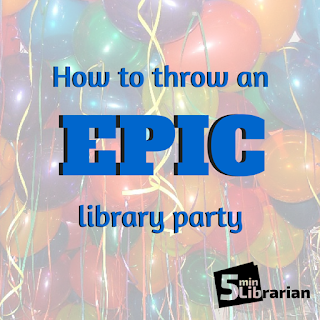 Having a "party" program at the library is one of the new trends I've been hearing about lately, and, as an event-loving librarian, I am completely on board. I've held many parties of different types and for varying age groups, and they almost always go over well.

Everyone loves a party - it's a scientific fact. Library parties are fun to plan, fun to hold, and fun to attend; there is very little downside. They often are low-cost and appeal to fans of a specific genre or series, and can be tailored to fit seasonal or timely events, such as a movie release or the arrival of a new book in a series.


The first thing you need to do is choose a theme. There are so many different themes you can choose from when throwing a party! Some that have been successful for me include:

I will write more about these topics in a moment. Once you have chosen a theme, you get to start planning! I find that Pinterest is particularly useful for this, because somewhere in the world, somebody has had a birthday party in your particular theme - it's almost guaranteed. A quick search will lend you ideas for:
...and anything else you could need. 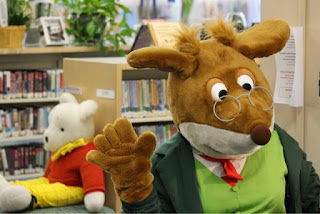 Choose your favorite book character and use them as a theme. This is particularly useful for children's programs, where the characters are the main source of entertainment in a book or series; with teen and adult programs, you may be more interested in the "Fandom Parties" section below.

I recently held a Geronimo Stilton party for grade school kids. For those not in the know, Geronimo is a middle-aged newspaper reporter who travels around the world, bumbling through various misadventures and writing about them. He also happens to be a mouse! His sister, Thea Stilton, has her own series, and there have been spin-off books about Space Mice, Cave Mice, and the scary Creepella von Cacklefur. As well as chapter books, there are also graphic novels and a television show.  Our party included a cheese tasting (4 different varieties of cheese with crackers, and a page directing kids in things to notice while eating them, such as texture, flavor, and color), a craft (make your own reporter notebook), some printed pages of mazes and games from the Scholastic website, and a visit from the mouse himself. (That is - me. I was dressed as Geronimo Stilton.)

Many children's book characters have adult-sized costumes that are available to purchase or rent. I've used Costume Specialists to rent characters, which are provided by the publishers for use by schools and libraries, and cost me only shipping. In addition to the Geronimo Stilton costume, I have already reserved Pete the Cat for a party coming up in October. A warning for those who are interested in this: it's hot. I spent two hours dressed as a giant mouse, and I was sweating buckets by the end of it. It's also fairly difficult to attempt to run the program when you're wearing a giant fake head and hands. 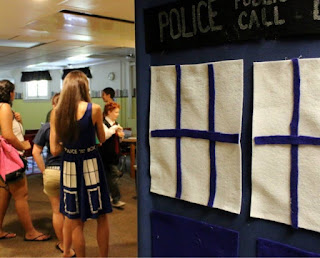 What is a fandom? It's a group of people who are really interested in a specific title, series, or author; this pertains to television and movie franchises as well as books. Fans may enjoy just watching or reading their show or series, or may be more active in a fandom community, and contribute by writing fan-fiction, drawing fan-art, or engaging in cosplay - that is, dressing up as a particular character and acting as if they are part of their favorite world. A note: depending on the fandom, this is a great way to reach adults who have not been library users. Some people have been fans of a show for decades, and will come to your party, and they will come in costume.

I have done fandom parties, and they are ridiculously fun to research, plan, and hold. If you can tap into a fandom that has a physical presence in your area, you are golden; by telling participants that you want to throw a party, there's a good chance they will assist you in coming up with ideas. Some successful ones we have done include Star Wars (with pool noodle light sabers), Firefly (with marshmallow guns to shoot at "Reavers" we put onto empty plastic bottles), and Doctor Who. (Note: Be careful with fandoms, though: they can be addictive. Doing a Doctor Who party was what actually got me into the series, and I am now a proud Whovian myself.)

The Doctor Who parties are probably my favorite, because I enjoy the show. We eat themed snacks: adipose cookies, "fish fingers and custard" (vanilla pudding with gummy fish), jelly babies that are actually gummy bears, etc. There are games, such as pin-the-face-on-Cassandra; and crafts, like make-your-own bow ties. If you have a movie license and it is permitted, fandom parties are the perfect time to use it. Play a marathon of episodes from a tv show, or a movie that fits the theme. I could not get in touch with anyone at BBC about showing Doctor Who, but many shows are owned by companies that you can get licenses for.

This flows nicely into... 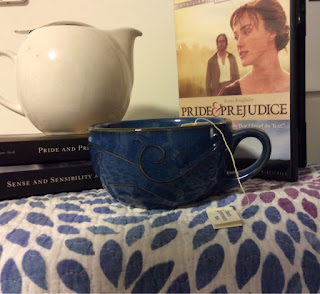 The party doesn't have to be for an actual birthday, though it is a nice touch if the person/character has a known birthday.  I have held birthday parties for Frosty the Snowman and for library mascots (Our library turtle Spike's birthday is January 31, because it's a particularly dead time of year), but my favorite one was probably for Jane Austen.

We had a Jane Austen Tea Party for her birthday a few years ago, and it was delightful. Tables were set with (paper) table cloths, and a random assortment of tea cups, saucers, and tea pots were available, having been donated over the years. We made a few different kinds of tea, with and without caffeine, and had freshly baked scones. (I baked the scones myself, being that kind of person, but store-bought biscotti would have worked just as well.) This party was held in the library's art gallery, and a version of "Pride and Prejudice" was shown on the movie screen while party-goers enjoyed their refreshments. We even had a deck of Jane Austen-themed tarot cards, and a volunteer who knew how to read them. (Note: I am still unclear what Jane Austen has to do with tarot, but it was all in good fun.)

Birthdays aren't the only days that should be noted in our calendars. There are also many anniversaries out there that should be celebrated. Is your library 100 years old? Party. Is it the publication date of The Hunger Games? Party.  My coworker (and creator of this blog), Jess, recently threw a party for the first anniversary of the opening of the Teen Room.

I did a great anniversary party for The Hobbit. The publication date is in mid-September, so we chose a Saturday, started up The Hobbit: An Unexpected Journey, and had an array of foods available for patrons to enjoy "second breakfast" (as hobbits are known to do). Sometimes that's all you need to do! 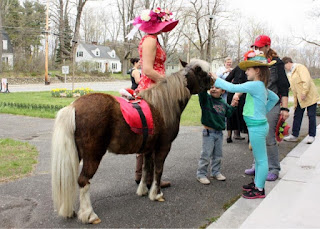 There are also hundreds upon hundreds of holidays to celebrate. Sure, we've all thrown Valentine's Day parties or Mother's Day Teas, but have you considered having a Talk Like A Pirate Day Shindig?

One of the fun parties we did when I worked at the Lawrence Library in Pepperell, MA was for the Kentucky Derby. A friend of a coworker owned miniature horses, and she brought them in for patrons to pet. We also had a funky-hat-making program for all ages, and showed horse movies in the auditorium (National Velvet transcends age barriers).

Have you had a great library party? Tell us in the comments!
Posted by Kat at 8:53 PM