﻿The Sherlock Holmes Book (Oct 2015)
An "elementary" reference to each of Sherlock Holmes' cases as written by Sir Arthur Conan Doyle provides infographics, inspirational quotes, and at-a-glace flowcharts that explain how the Baker Street detective reached his conclusions through deductive reasoning.

Sherlock Holmes: Color in Classics by Simon Balley (Mar 2016)
Color in 70 pages of scenes related to the classic Holmes stories.

The Great Detective: The Amazing Rise and Immortal Life of Sherlock Holmes by Zach Dundas (June 2015)
A journalist and lifelong Sherlock Holmes fan explores Doyle's original tales to reveal how they laid the groundwork for a myth of seemingly infinite variety in literary and screen adaptations. 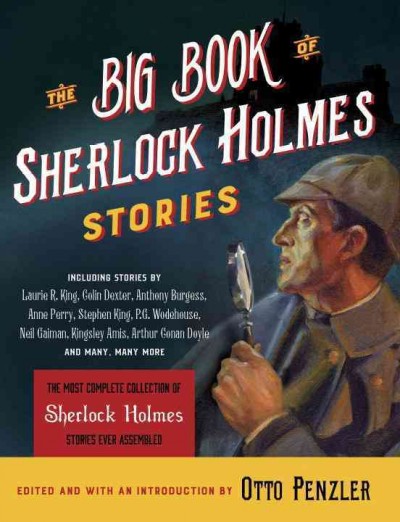 The Big Book of Sherlock Holmes Stories edited by Otto Penzler (Oct 2015)
A massive collection of Sherlockian tales, presented by an Edgar Award-winning editor, features more than 80 stories about Holmes and Dr. Watson.
﻿﻿

The Clockwork Scarab by Colleen Gleason (Sept 2013)
In 1889 London young women are turning up dead, and Evaline Stoker, relative of Bram, and Mina Holmes, niece of Sherlock, are summoned to investigate the clue of the not-so-ancient Egyptian scarabs - but where does a time traveler fit in?

Lock & Mori by Heather W. Petty (Sept 2015)
In modern-day London, sixteen-year-old Miss James "Mori" Moriarty is looking for an escape from her recent past and spiraling home life when she takes classmate Sherlock Holmes up on his challenger to solve a murder mystery.

A Study in Charlotte by Brittany Cavallaro (Mar 2016)
Sherlock Holmes and Dr. Watson descendants, Charlotte and Jamie, students at a Connecticut boarding school, team up to solve a murder mystery.

Down the Rabbit Hole: An Echo Falls Mystery by Peter Abrahams (Aug 2008)
Like her idol Sherlock Holmes, eighth grader Ingrid Levin-Hill uses her intellect to solve a murder case in her home town of Echo Falls.

Sherlock, Lupin & Me: The Dark Lady by Irene Adler (Feb 2014)
While on summer vacation at the seaside, twelve-year-old Irene Adler meets the young Sherlock Holmes, and his friend Arsene Lupin - and when a dead body floats ashore the three young friends set out to solve the mystery. Sherlock Holmes in The Hound of Baskervilles by Jennifer Adams (Sept 2013)
This board book introduces sound using characters, places and events from Arthur Conan Doyle's "The House of Baskervilles."

Sherlock Holmes and a Scandal in Bohemia adapted by Murray Shaw (Nov 2010)
Retold in graphic novel form, Sherlock Holmes attempts to retrieve a photograph being used to blackmail the King of Bohemia and finds something even more valuable.

The Sherlock Files: The 100-Year-Old Secret by Tracy Barrett (Mar 2010)
Xena and Xander Holmes discover that Sherlock Holmes was their great-great-great grandfather when they are given his unsolved casebook, from which they attempt to solve the case of a famous missing painting.