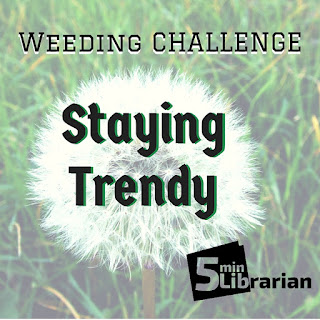 A few weeks ago, we here at the 5 Minute Librarian gave you a crash course in Weeding 101.
I mentioned that you need to take the time to go through your collections every so often and see what's old and needs updating. I even joked: "Do you really want to be the library that still has the biography of Milli Vanilli on the shelf?"

Here's the thing, though: When did Milli Vanilli become so old that it's a joke to have their biography? Yes, they're from the 1980s, so this is an extreme example, but there had to be a point when it was time to weed that book from the collection before it was silly to have it. Today, we challenge you to think about staying on top of cultural trends, so your library can be current.

In many sections of the library, especially fiction books, you can get away with not weeding for a while. To stay on trend, though, there are some books that should be looked at annually. These include:
Let's take a closer look, shall we?

This stuff changes fast. A player who is beloved to everyone in your corner of the world could leave or be traded to another team or city, and be irrelevant to you (or worse) in the blink of an eye. In Massachusetts, the sports world consists mostly of the Boston Red Sox, the Boston Bruins, and the New England Patriots. There are other teams around, but these three may as well be the Holy Sports Trinity. I'm a casual fan; that is, if the game is on I will take a glance at the score, cheer for the local team, and go back to what I'm doing. I do not follow sports closely enough to know anyone except the major players.

That said: I have a story for you, about why you should remain current on this topic. Years ago, while still in library school, I worked at an independent bookstore, where the owner got "this AMAZING deal!" on the biography of Johnny Damon - he bought probably 200 copies of this book. (For those not in the know, Johnny Damon was one of the most popular players for the Red Sox, and had professed that he would NEVER play for the New York Yankees-one of the biggest rivalries in sports. And then, they offered him a lot of money, and he left Boston to play for New York. To sports fans, it was as if Boston itself had been stabbed in the back.) Anyway. My boss decided to put these books on display, a scant year after he had gone to the Yankees. I had one very nice, kindly older lady tell me that she "wouldn't even take a book about that Despicable Rattlesnake if it was free with purchase!"

Don't forget to take a look at the team books, too. Sure, the local football team is the same team, but your books about them might have information about "current" players who have since retired, or may not have information about recent seasons. Check out the sports almanacs, too - these should be updated every year, and then you can get rid of the old ones.

It's a cruel world out there, and someone with the spotlight can suddenly be pushed into the shadows. Not to add to their torment, but if they are no longer on television or in movies, they are fairly irrelevant to us, too. Check the shelves, and check the statistics.

This is particularly true for child- and teen-actors. Even if they are still working and culturally relevant (good for them!), they have probably changed drastically. Take Miley Cyrus, for example: she went from country-pop Hannah Montana to a completely different type of pop artist. You might want to get rid of the books about her as a brunette child, and pick up a new one about her avant garde adult lifestyle.

This is also the time of year when we can take a look back at the previous year's major events, and act accordingly. I have weeded every Bill Cosby book from the children's department, due to recent developments. I also bought every single book I could find about Malala Yousafzai (who is not exactly a celebrity, but she is relevant and out there, and I am personally just amazed by her). And, sure, you might have a patron-base who needs to read all about Donald Trump, but he, and many other politicians, may be in next year's dust bin.

A lot of this rings true for musicians and singers, too. Have they had an album come out recently, or will they be working on a new one? Do they still have a strong fan-base, or were they teen idols who have out-grown their cherubic innocence? It's hard for me to know what's on trend and what's not, so I find the easiest way to answer this is to ask the patrons - particularly the teens. "Hey guys, does anyone care about One Direction anymore? Okay, back on the shelf it goes." If you're not comfortable doing this, you can always see if they have tours/album ongoing or coming up, or even take a look at your ordering system and see if anyone is still writing books about this particular artist. If nothing new is coming out, you may not need the old things, either.

This is particularly helpful for me in the children's room, but there are movie and book tie-ins and novelizations for all ages. For example, Bear in the Big Blue House is not on television anymore, so I can probably get rid of books starring those characters. Likewise, once Castle goes off the air, people will forget about the books "by" TV character Richard Castle (played by the adorable Nathan Fillion, who himself will always be relevant). We can also get rid of the behind-the-scenes-of-filming for older movies and shows.

This is not to say that we need to get rid of every single book about a person/band/sports team that is no longer new and exciting. There are hundreds of books about people who have achieved a sort of icon status, and just because The Beatles aren't around, doesn't mean you have to weed books about them. I'm just saying, you don't have to have books about the ephemeral celebrities, once their 15 minutes of fame is over.

As we said last time, the first thing to do is to take a good look at your circulation statistics; if a book isn't going out, it's probably passe. There are also many titles that, for whatever reason, get missed on the statistics (for example, if the call number has a space in front of it in the computer system, it won't appear accurately if you sort by call number), and for this reason, I recommend doing an actual Shelf Check. Heck, print out the stats and bring them with you!