Three to Go Library Card: The Benefits of a Limited Access Card 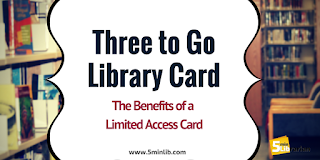 Today, I am going to talk about a different kind of library card that I didn't know could be an option until someone mentioned it on social media last fall.

It is called the "Three to Go" Library Card and it offers limited access to the library. It was created for patrons who may be missing a piece of paperwork (or a guardian) which would normally prevent them from getting a library card.

It was a brilliant idea and I brought it to my previous library. Being a Teen Librarian, I thought it would be perfect for my teens who might not have parents with them. (Or, if we wanted to work with schools to give teens library cards.) However, after we instituted it, we learned that ADULTS loved this option. We didn't realize how many times a week we turn patrons away because they didn't have a piece of mail to confirm their address and get a library card. Suddenly, we had a way to turn those negative interactions into a positive experience!

1. Patrons filled out the same library card form everyone else did.

2. We put it in a special envelope so we could keep track of these "incomplete" applications.

3.  We created a library card for them and noted on their account that this patron can only have 3 items checked out on this card at all times, until they upgraded. (So, staff needed to remember to check their "Check out" list before they checked out any items.)

After six months, we ran a statistics report to see how this program was faring. We were surprised to see that they fell almost equally into three parts:

1. Patrons loved this option! Before, we had to turn new patrons away because they were missing a piece of the application, and so many of them were disappointed because they really wanted to check something out during this visit. Now we could say yes, you can use the library.

2. Not all patrons came back to upgrade their card. We realized this could be due to many reasons, such as:
a. They only intended to use the library once.
b. They were temporary residents, so they only needed a temporary card.
c. They wanted access to our online collection which this card granted.
d. They were content with only checking out three items at a time.
e.  They weren't able (or wanted) to get their parents to come to the library.

3. We realized that #2 is a segment of our population we were not serving when we didn't have this limited library card. Before, we were turning these patrons away, and, for many of them, this could have been their one and only negative interaction with the library.

4. We did realize that it was important to get all Circulation Staff on board with this program. They were the ones who had to offer it to people who couldn't complete an application AND they needed to remind patrons at each checkout that they can upgrade their card when they complete the application. (We did have a patron who forgot and thought he would always be limited to three items.)

5. While it is disappointing to not have items returned, we were pleased that the library AND two thirds of participants were benefiting from this program.

Perhaps this limited card may also work for you and your library.
Posted by Jess at 8:00 AM