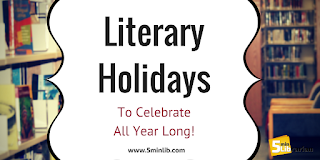 It's almost the new year, and you know what that means - planning for next year! I love planning almost as much as I love celebrating, so I've gone ahead and compiled a list of holidays to celebrate all year long, so I can get my 2017 calendar in order. If you have more literature-based or library-friendly holidays, please let me know and I will add them!

Please note that, while many of these holidays are officially sponsored by (and you can purchase posters and such from) the American Library Association, many of them are made up just for fun, and there is no official, cohesive, governing body. As such, you can celebrate them however you like. I have linked to official sources where I was able.

Read an Almanac Month
7/16-21 (third week of July) – Hemingway Days takes place in the Florida Keys
7/30 – National Paperback Book Day
7/31 – Harry Potter Day (July 31is both Harry's and J.K. Rowling's; many also celebrate May 2, which was the day of the Battle of Hogwarts in the Harry Potter series)