This past Monday, the American Library Association announced the winners of the 2017 Youth Media Awards. All one hundred of them! No, actually not that many, but close when you add in all of the lists, too. It is an exciting time to see who won, but it may also be overwhelming to the slow or busy or selective reader. 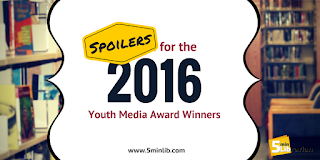 Thankfully, our sister blog, Spoilers, Sweetie, is working hard to help in this endeavor. (After all, there's still reader advisory to do!) Since the winners were just announced, it'll take them a while to compile spoilers for the 2017 winners. But if you didn't have a chance to read last year's winners (and in some cases, winners from 2015), here's your chance now. We divided them up into three categories, depending on where you are most interested in:

To be notified of spoilers for 2017 (and they're finishing up 2016), make sure you follow the Spoilers, Sweetie blog! Each award is posted only after all of the winning books are read and spoiled by a fabulous volunteer team. If you plan to read a 2017 winner and would like to submit a spoiler, please register here.

Happy reading/spoiling!
Posted by Jess at 9:02 AM