Welcome to our series, "Ready to Go!" Book Display. Once a month we'll highlight the latest or greatest for every age group that you can promote within your library or order for your collection. See her new movie in theaters on June 2nd and celebrate Wonder Woman Day on June 3, 2017.

Recommendations for Adults and Teens: Wonder Woman: The True Amazon by Jill Thompson (Oct 2016)
A Princess Diana unlike any we've seen before. As a child, she is spoiled and free to exert her will without restraint -- until her selfishness leads to tragic results. Before she can become a hero, she will first have to find redemption. Wonder Woman, A Celebration of 75 Years by William Moulton Marston (Oct 2016)
Celebrate over seven decades of the awe-inspiring Wonder Woman, from early years as one of the first female superheroes in the comics industry to today. Wonder Woman: Her Greatest Battles (Feb 2017)
This volume brings together the biggest and greatest battles and moments in Wonder Woman's history as a DC Comics superhero. Wonder Woman: Warbringer by Leigh Bardugo (Aug 2017)
Diana longs to prove herself to her legendary warrior sisters. But when the opportunity finally comes, she throws away her chance at glory and breaks Amazon law - risking exile - to save a mere mortal. Even worse, Alia Keralis is no ordinary girl and with this single brave act, Diana may have doomed the world.


Wonder Woman: The Art and Making of the Film by Sharon Gosling (May 2017)
This book showcases the earliest concept art, set and costume designs, sketches and storyboards, as well as delving into the filmmaking process, from creating the stunning island of Themyscira to the war-torn trenches and towns of First World War Europe.


Wonder Woman Vol. 1: The Lies (Rebirth) by Greg Rucka (Feb 2017)
In order to solve the riddle of her orgin, Diana must embark on her greatest quest of all: finding a way back to her vanished home. To get there, she must team up with her greatest enemy, the feral beast-woman, Cheetah.

The Legend of Wonder Woman Vol. 1: Origins by Renae De Liz (Dec 2016)
When a man from the outside world is brought to Themscira as part of a conspiracy to overthrow its queen, Diana will risk everything to save his innocent life... and lose everything in the process. Superman/Wonder Woman, Volume 1: Power Couple by Charles Soule (Mar 2015)
The first in a series that details the relationship between The Man of Steel and the Warrior Princess. These two super-beings love each other, but not everyone shares their joy. Wonder Woman: Amazon Warrior by Steven Korte (Feb 2016)
A biography profiling the Amazon princess details how she became a superhero protector of humanity, discusses the abilities she uses to fight for justice and provides a timeline of major events in the character's life. Wonder Woman: An Origin Story by John Sazaklis (Mar 2015)
Born an Amazon princess on the island of Themscira, Diana leaves the island to become Wonder Woman, defender of Earth. Wonder Woman to the Rescue! by Courtney Carbone (Jan 2016)
Introduces Wonder Woman, an Amazon gifted with powers from the gods to fight evil and save the day. 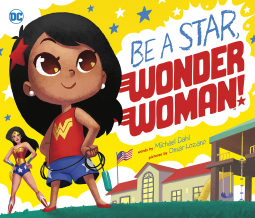 Be a Star, Wonder Woman! by Michael Dahl (Jun 2017)
As a new day dawns, a young girl faces the ultimate challenge: school! Follow along as she demonstrates her greatest superpower (sharing), overcomes her worst fear (the playground), and conquers her archenemy (the spelling test).