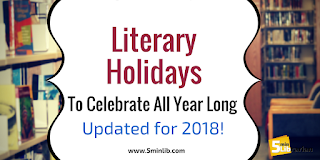 It's the new year, and we're filling up our calendars with literary holidays! I love planning almost as much as I love celebrating, so I've updated last years's list of holidays to celebrate all year long, so I can get my 2018 calendar in order. If you have more literature-based or library-friendly holidays, please let me know and I will add them in.

Please note that, while many of these holidays are officially sponsored by (and you can purchase posters and such from) the American Library Association, many of them are made up just for fun, and there is no official, cohesive, governing body. As such, you can celebrate them however you like. I have linked to official sources where I was able.

LGBTBook Month, Audiobook Appreciation Month
6/12 – Anne Frank’s birthday (on which she received her diary)
6/16 - Bloomsday (the day on which most of James Joyce's Ulysses, whose main character is Leopold Bloom, takes place)
6/19 – National Garfield the Cat Day (strip is first published, 1978)
Bonus: Any beautiful Wednesday in June can be Mrs. Dalloway Day

Read an Almanac Month
July 4-6 - National Tom Sawyer Days
July 10 - Clerihew Day (in honor of the poet Edmund Clerihew, who invented a fun style of poetry)
7/15-21 (third week of July) – Hemingway Days takes place in the Florida Keys
7/30 – National Paperback Book Day
7/31 – Harry Potter Day (July 31is both Harry's and J.K. Rowling's; many also celebrate May 2, which was the day of the Battle of Hogwarts in the Harry Potter series)

Read a New Book Month
12/1 – Sherlock Holmes Day (“A Study in Scarlet” was said to have been first published 12/1/1887 - this is actually in dispute, but we can still celebrate)
12/16 – Jane Austen’s birthday
12/24 - Jolabokaflod - the "Christmas Book Flood" is an Icelandic tradition, in which people open gifts of books on Christmas Eve, and retire to bed early to read them.
Posted by Kat at 4:19 PM

Email ThisBlogThis!Share to TwitterShare to FacebookShare to Pinterest
Labels: Kat