Creating a Plan to Create an Escape Room 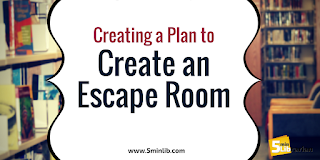 Despite our best efforts, the 5 Minute Librarian team doesn't know absolutely everything there is to know about librarianship. Luckily, we do know some really awesome people. This week, we have guest blogger Christina Dufour, Teen Librarian at the Thayer Public Library in Braintree, Massachusetts, to walk us through one of the coolest - and most intimidating - programs ideas we've seen lately: Creating escape rooms.

So you want to create an escape room…now what?

The first thing I did before creating any of my Escape Rooms was to do field research – I went and played in several Escape Rooms.  In my area that is a 5 Wits as well as Escape Rhode Island in Providence.  I played several different narratives to see what kinds of puzzles we might be able to use and how different places designed their rooms.  Since then, I have also read several articles about what other libraries are doing. You can use lock boxes, Morse code, word searches, black light flash lights, and tons of other stuff! With all that in mind, here’s how I ran 2 different Escape Rooms for our library.

For me, when planning a room, choosing the theme is the first step.  In my mind, there’s no sense planning a room of puzzles first.  It has been much easier to pick a theme, create the narrative, and then plot the puzzles.  I use my flyers to communicate what the theme is, but the narrative stays a surprise!
Last year, our community read theme was themed around art.  So I created an Escape Room under the guise that Scott Cawthon (Five Nights at Freddie’s creator) had a traveling art exhibit.  The narrative was that teens had been invited for a private tour 15 minute tour of Scott’s private art gallery consisting of tons of framed Video Game art prints (thank you, internet!) but Scott was nowhere to be found.  Rumor had it that he had hidden an Easter egg to his next video game somewhere in the room, but teens only had 15 minutes to search and find it before getting caught.  Now, I don’t actually know Scott Cawthon, so all of this is made up, but my teens had fun anyways.
My second theme and narrative is Stranger Things-inspired (it will be taking place next week during school vacation). My Teen Advisory Group voted for this theme and I focused on the narrative.  Luckily, it syncs up with our mystery theme for this year’s community read.  The idea is that teens have been invited on a tour (man, I like giving tours…) of the Hawkins Laboratory. The only problem is that, just before arriving, a monster may or may not have been let loose in the lab.  Now teens have 15 minutes to solve* the puzzles in the room and find the code that will unlock the door override system.
*Please note that most Escape Rooms are traditionally longer.  1 hour is most common but, due to time constraints and limited staffing, my rooms have been condensed down to 15 minutes.  I do let teams re-try a room, if time or participating teams permit.

Now that you have your theme and your narrative, you’ll need to pick some puzzles and an end goal.  The end goal could be to unlock a box, find a key, or find a certain thing.  With my first room, there was a hidden object (a book) that contained the video game plans.  With my second room, they need to find a 3 digit code that contains the “off switch”.
I find that working from the end goal backward is helpful, as was asking my teens for input because I used some and then some of what they had to say spawned other ideas.  I also like to use, what I am calling, a “puzzle planner” – this helps me think methodically through any puzzles I want to use and track how they link to each other and the goal.  The attached one was one brainstormed from Teen Advisory Group and hasn’t actually been tested…
It also helps to be aware of what you can logistically use.  For both of these rooms, I think I spent under $50. I purchased two blacklight sets (yellow, blue, pink pens with blacklight lights) from Amazon. I also purchased 2 Vaultz lockboxes and 1 mini lock box with a key from Amazon.  Everything else was printed or recycled from within the library.  We don’t have any doors to actually lock, so the word locks wouldn’t have made sense for us.
This year I am using a word search and Morse code, which is easy because there are online word search builders as well as Morse Code keys. I plan to print multiple word searches and simply replace them during the reset phase.
With the Art Exhibit Escape Room, I used our program room.  This room has 2 kitchens and 2 tech closets, so I explained to teens that they were to stay within the open space unless a clue specifically said otherwise (the book was hidden in a kitchen).  I used several tables and placed Video Game pictures in black frames.  I hung some up as well.  There was also one random vase (which contained tissue paper and the blacklight lights).  Some of the picture frames had blacklight messages, such as “nice try!”, “so close!”, and several math equations.  These numbers (when all found) gave them the code for lockbox #1*.  This box contained a key.  The key led them to the locked “cash” box (with printed Monopoly money).  If they noticed, there were only the same couple of bills in there.  On the back were more blacklight flashlights and simple math.  Again, put the 3 digits together and it unlocked the final box.  The final box told them it was “behind these doors” and they’d be able to find the book.  Don’t be afraid to add red herrings - if you have a longer program especially - because it adds to the fun.
Note: *If you use Vaultz lockboxes, keep that code!  It’s a pain to have to reset it without it.  You can change the numbers after initial set up, but you’ll need that first code.
The plan sounds like a lot, and for some groups it was, but I allowed all teams to try to ‘beat their time’ and they loved that.  We also used this set up with a Dr. Seuss art museum theme for the children’s department.  It was slightly different as we dropped a lot of the math parts.
Next week, we will be running Escape the Lab (a Stranger Things-inspired Escape Room) in our program room.  Here’s the rough outline:
Teens have been invited for a tour and now have to escape.  In the room, they will find several things: a board game and 2 boxes. One is locked and needs a 3 digit code, one is unlocked and contains cassette tapes.  If players open the board game, they will find a Morse code key, a word search, a Dungeons and Dragons character sheet partially filled out, and D4 dice.  (Please note: you won’t need to think about a red herring here because the board game choice doesn’t matter – it will be enough to throw them off.)  In the unlocked box are several cassette tapes, blacklight flashlights, and a journal entry from Dustin.
The goal of this is the 3 digit coded box, as it contains the “off switch.”
Digit 1: The teams will need to realize that there is Morse code on the board game box as well as the D&D character sheet.  The Morse code key is in the box, so they just have to see what it spells (eight, 8).
Digit 2: The word search contains only The Clash songs from their album Combat Rock – in particular it had “Should I Stay or Should I Go” a few times.  If they look at the cassette tapes, they will find Combat Rock (and other albums) and in that album case is a clue that says “track 3” (3).  (Sidenote: I don’t actually own cassette tapes anymore.  I used cassette tapes that had been donated to the library, which we normally throw out, and upcycled them.  I measured the cassette tapes, recreated the album cover, and created a track list in Publisher.  With mod podge, I glued the new album covers to the inside front of the case, and the tracklistings to the inside behind the cassette tape, so it would still shut).
Digit 3: The D&D sheet is important.  It’s Dustin’s (well…it says so on top) and there is a journal entry where he takes notes.  If teams read it, they will realize that Dustin brought 4 D4s this session, as he was expecting to level up to 4th by the end of that day (4).  (I fibbed A LOT here, as I don’t actually have a D&D book to rule check 1983’s Dungeons and Dragons Player’s Handbook and haven’t read that edition).

Enter 834 and they can get to the off switch! 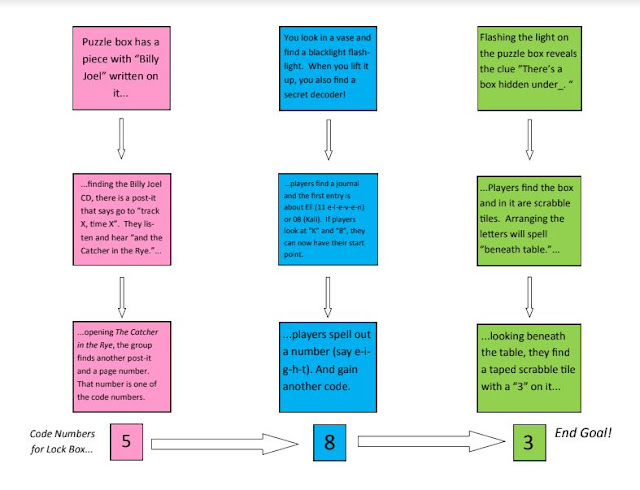 Before the Day of:

Before the day of your program, you’ll want to consider the following: how much time am I allowing for play and how much time will I need to reset?  Also, for waiting teams, what will they be doing?  I typically give 15 minutes for teams to solve the room, 5 minutes to reset- repeat.  I run this over a 2 hour time frame. While waiting, I have provided word searches, riddles, and other games that get teens brains working.

On the Day of:

On the day of your room, you’ll want to consider the following:


In the end, it doesn’t take much to be clever.  Your teens are experiencing an Escape Room for free and are bound to have fun with their friends.

Many thanks to Christina for her valuable input on an intimidating topic! We'd love to hear if you have attempted to create an escape room, and how it went for you. Tell us in the comments here, on Twitter, or on our Facebook page.
Posted by Kat at 1:20 PM