Welcome to our series, "Ready to Go! Book Display." Once a month we'll highlight the latest or greatest for every age group that you can promote within your library or order for your collection. This month we are featuring books with merpeople! Jessie Sullivan is summoned home to tiny Egret Island, where she meets Brother Thomas, a monk who is about to take his final vows, and encounters the legend of a mysterious chair dedicated to a saint who had originally been a mermaid. Mermaid: A Twist on the Classic Tale by Carolyn Turgeon (Mar 2011)

Falling in love with a prince whose rescue by a mermaid she secretly witnesses, Princess Margrethe is promised in marriage to the prince to bring peace to their warring kingdoms only to discover that he has taken a familiar-looking lover. The Mermaid Handbook: An Alluring Treasury of Literature, Lore, Art, Recipes, and Projects by Carolyn Turgeon (May 2018) Opera singer Kathleen has always suffered from strange maladies, and when they get in the way of her career, her girlfriend Harriet encourages her to visit Ireland to determine the cause of her dark family legacy of suicide. Clara discovers that her sister is becoming a mermaid, and realizes that no mermaid can survive on land. Desperate to save her, she and her friend load the girl in a gypsy wagon and begin a journey to the sea. Lena, almost sixteen, has always felt drawn to the waters of San Francisco Bay despite the fears of her father, a former surfer, but after she glimpses a beautiful woman with a tail, nothing can keep Lena from seeking the mermaid in the dangerous waves at Magic Crescent Cove. September Girls by Bennett Madison (May 2013)

Vacationing in a sleepy beach town for the summer, Sam is pursued by hordes of blonde girls before falling in love with the unusual DeeDee, who compels him to uncover secrets about the community's ocean-dwelling inhabitants. Deep Blue by Jennifer Donnelly (May 2014)

Uncovering an ancient evil, Serafina, a mermaid of the Mediterranean Sea, searches for five other mermaid heroines who are scattered across the six seas, to save their hidden world. 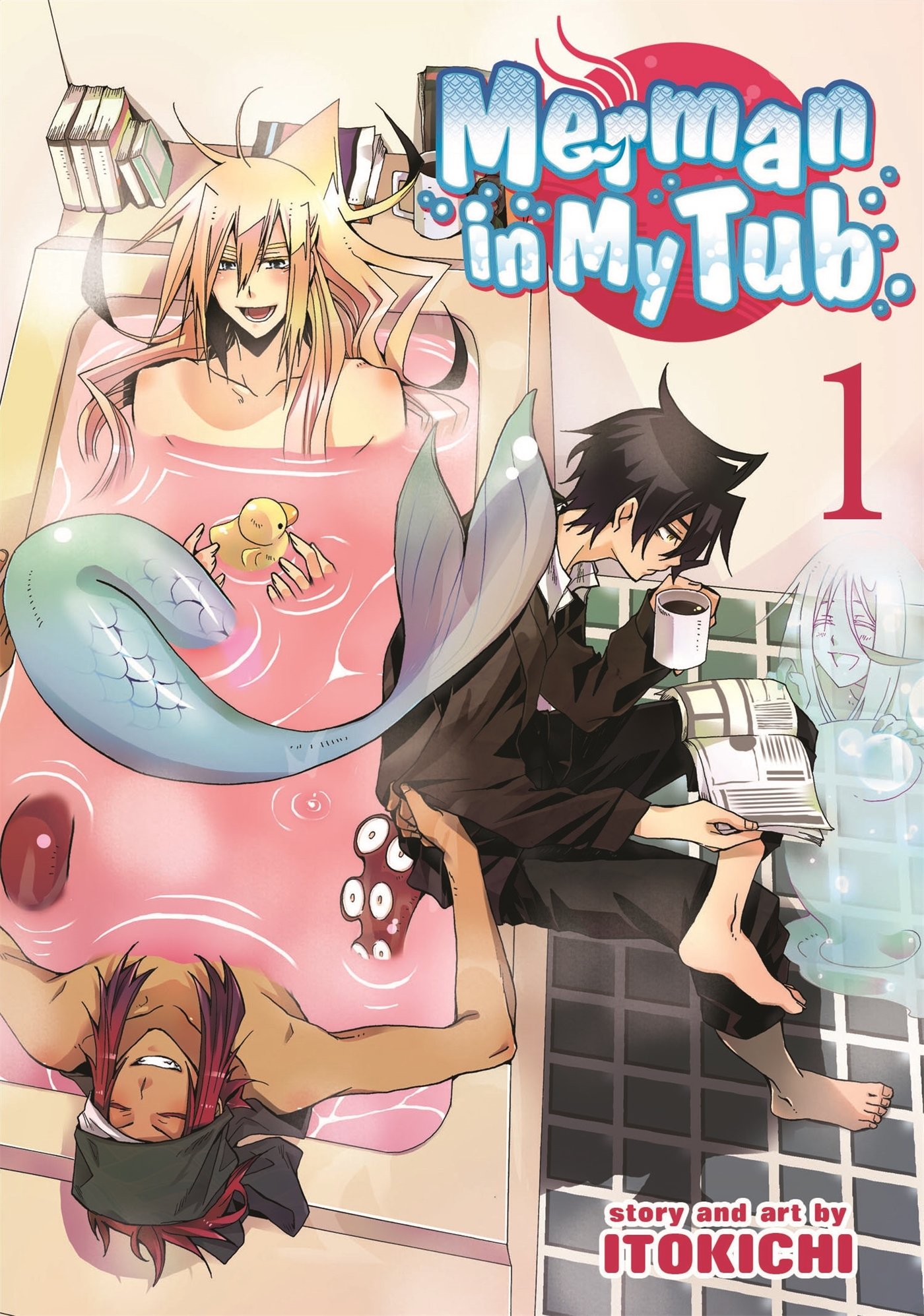 What happens when an intruder from the sea stakes claim to your bathtub? A cool yet demure teenage boy named Tatsumi must learn to live with the self-obsessed and playful mermain, Wakasa, in a small Tokyo apartment in this manga series. Galen, a prince of the Syrena, is sent to land to find a girl he's heard can communicate with fish. He finds Emma and after several encounters, including a deadly one with a shark, Galen becomes convinced Emma holds the key to his kingdom. Set in the ocean off Japan, this retelling of Goldilocks and the Three Bears stars Kiniro, a mermaid, who finds a baby octopus's breakfast, chair, and bed just right. The Little Mermaid by Trixie Belle (May 2013)

Toddlers and preschooler can discover the fairy tale of the Little Mermaid with just a handful of words and bright, enchanting illustrations. Glimpsing a trio of women dressed up in fabulous mermaid costumes while riding the subway home with his abuela, little Julian resolves to make a fancy mermaid costume and headdress for himself and wonders what his abuela will think of the mess he makes, and more importantly, how his costume will reflect how he sees himself. No Kidding, Mermaids are a Joke! The Story of the Little Mermaid, As Told by the Prince by Nancy Loewen (Jul 2013)

Introduces the concept of point of view through the prince's retelling of the classic fairy tale. Poor Unfortunate Soul: A Tale of the Sea Witch by Serena Valentino (Jul 2016)

Presents an adaptation of the classic Little Mermaid fairy tale from the perspective of the sea witch who provides Ariel with human legs in exchange for her voice. Fish Girl, a young mermaid living in a boardwalk aquarium, has never interacted with anyone beyond the walls of her tank until a chance encounter with an ordinary girl, Livia. Their growing friendship inspires Fish Girl's longing for freedom, independence, and a life beyond the aquarium tank. Dive under the sea and into Ariel's enchanting world. Featuring a sea witch and her spells, dinglehoppers and mermaids, this storybook retelling of the classic animated film is a treasure to behold. Also check out: The Little Mermaid: Read-Along Storybook and CD. As a child growing up in Australia, Annette Kellerman was a frail ugly duckling who dreamed of becoming a graceful ballerina. With courage and determination, she confronted a crippling illness to become an internationally known record-setting athlete who revolutionized the sport of swimming for women, a movie star who invented water ballet, and a fashion revolutionary who modernized the swimsuit. The Tail of Emily Windsnap by Liz Kessler (Apr 2012)

After finally convincing her mother that she should take swimming lessons, twelve-year-old Emily discovers a terrible and wonderful secret about herself that opens up a whole new world.