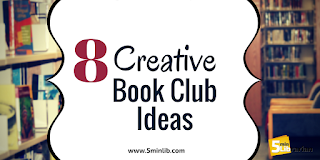 Everyone loves a book club, but sometimes even the most well-attended group can start to feel stale. We looked into some different ways to revive, or start an entirely new club, and have compiled a list of ideas for you.

Different Genres - Every month, your patrons can read a book of a different genre. Maybe January can be a mystery, February is historical fiction, and March highlights local authors. Perhaps you use cultural heritage months, and read books from around the world or different ethnic groups. Maybe you create a Diversity Matters group, and read titles from a broad range of nationalities and ethic groups. The sky is the limit! Broaden those horizons!

One Genre - So, your group loves mysteries. Start out with a murder mystery, move to a Cozy, and continue on to a police procedural. Investigate the options within your one genre by alternating between classics, lesser-known authors, and the first book in a James Patterson series.

Mysteries aren't your thing? No problem! There are shades of every genre, from science fiction to romance. One of the most popular clubs at a previous library was a group for tweens that read and discussed fantasy books each month. Specialized? Yes. Successful? Yes! The Muggle Support Group (I wish I could take credit for that name, but it predated me) was very popular.

Arts and crafts are hugely popular and successful at almost all age levels, and reluctant participants tend to be more talkative in a group setting when they have busy hands. Why not combine a crafting experience with a book discussion? You may want to keep the craft fairly repetitive and easy to do while focusing on a discussion, such as decoupage or coloring, rather than an involved craft that needs extra attention paid to instructions. Book clubs combined with knitting groups are a great combination.

We wrote about adding Cookbook Clubs, both by cooking theme or by cookbook, in a previous post, but it bears repeating! Cookbook clubs are a trend that we've seen a lot of lately, and they can be run in various ways. Will everyone cook the same style of dish from their own cookbook, or have the same cookbook and make different dishes? The choice is yours!

Another option is to have book clubs that serve food associated with the book. Many cozy mysteries and Amish romances include recipes in the back of the book, and titles of just about any genre include descriptions of meals that could be eaten. I would recommend probably sticking to smaller dishes, such as appetizers or desserts, rather than trying to cater an entire luncheon, but the choice is yours. This could also be done regionally; is your book set in Italy? It's the perfect time to serve some bruscetta! Are you reading Jane Austen? Scones and tea may be called for.

If this is cost- or time-prohibitive but appealing to you, it may be wise to ask your book club members to volunteer to bring one dish per month; alternating between who provides refreshments shouldn't overly be a burden, and would make things much easier on you.

Of course, we also see book clubs with wine or beer, usually held at a local restaurant or brewery. Just getting the club out of the library can reinvigorate a stagnant club, or add some "cool" factor to the mix.

Book Tastings are not to be confused with book clubs with food! Generally, tables are set up as though at a restaurant, each place setting including one book rather than a plate. Members read the back cover or front flap, and the first chapter, to see if it's something they may be interested in, then alternate books. After "tasting" each title, members of each table can discuss which books they are interested in and why. (Some clever librarians also include an actual dessert - you have three books, and then a slice of pie.)

When learning to read, at any age, one of the challenges is being interested in what you're reading. Why struggle through when you don't really care what Dick and Jane do in the first place? Enter the Book Club. These can be useful for children beginning to read, but also for adult literacy or English Language Learners. Of course, you don't want to be talking down to a person just because they are working on mastering a skill, so choosing a book in these instances can be more difficult, but non-fiction titles tend to work well for most groups.

The idea of a parent-child book club isn't a new one, but it can be a valuable addition to your inter-generational programming. Have each group of adults and children read the titles together, so they can discuss as a group how they feel about characters, actions, and plot - views change a lot when the character you relate to is the parent rather than the child in a story! This can be useful as a bonding experience, but also as an exercise to remind parents to remember what it's like to be a child and see things from their point of view.

When a book becomes a movie, they have to change things, if only because there's just not enough time to transfer every single detail from the page onto the screen. Whether they do it well or do it poorly, avid readers always want to talk about it!

The options here are to have a showing of the movie (license permitting), or to distribute copies of the movie just like you would with a book. Get together after the movie and discuss just like you would a normal book, but including the adaptation into your conversation. Do the characters look and sound like they thought you would? Did they include all the most important scenes?

Rather than trying to get everyone to read the same book, have a group where people discuss what they're currently reading and enjoying and what they're excited about coming up. Then, showcase some titles that are new or exciting to you at the library, recommending specific books to specific patrons if possible. This type of group has worked for me especially well with teens, where I feed them baked goods. We call it "Books and Brownies."

We would love to see what kinds of creative book clubs you've been running! Please leave us a comment here, on our Facebook page, or on Twitter.
Posted by Kat at 1:01 PM

Email ThisBlogThis!Share to TwitterShare to FacebookShare to Pinterest
Labels: Kat