Hate in the Library: Voices of Opposition 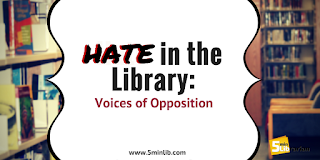 Recently, ALA updated their Library Bill of Rights. And one particular line has people fired up: they specifically mention that Hate Groups should be allowed to discuss their activities in library meeting rooms:

“Public libraries are bound by the First Amendment and the associated law governing access to a designated public forum. A publicly funded library is not obligated to provide meeting room space to the public, but if it chooses to do so, it cannot discriminate or deny access based upon the viewpoint of speakers or the content of their speech. This encompasses religious, political, and hate speech.

“If a library allows charities, non-profits, and sports organizations to discuss their activities in library meeting rooms, then the library cannot exclude religious, social, civic, partisan political, or hate groups from discussing their activities in the same facilities.” - ALA's Library Bill of Rights (2018)


School Library Journal released an article a few days ago titled Free Speech Debate Erupts with ALA's Inclusion of Hate Groups in Revision of Bill of Rights Interpretation. In that article, ALA Office of Intellectual Freedom Director James LaRue and co-chair of ALA's Equity, Diversity, and Inclusion Implementation Working Group, Martin Garnar, both defend this decision. They believe that the First Amendment gives all patrons the right to use library meeting rooms, if they are open to the public. If you go to ALA's Hate Speech page, you'll see court cases which supports why they think libraries cannot exclude hate groups.

But their line of reasoning feels wrong on so many levels. Yes, a library has to protect free speech since it is part of the government, but don't we also have a duty to make sure all patrons feel welcome and safe? There has to be a middle ground. Going down their line of thinking is really scary in this dangerous time, most especially since hate crimes (according to SPLC) are on the rise. I am really worried about where America is heading. I understand that people can have different opinions, but there has to be a line somewhere. And for me, that line is people's safety - both patrons and staff. If we wouldn't allow what was being said behind closed doors to be said in the middle of the library, then why are we allowing it?

Libraries Do Stand Up Against Hate

And we don't allow it, do we? When one library had a display up of a poem that was clearly offensive to the Muslim population -- outside library workers and the public pressured them to take down the poem. Patrons shouldn't feel threatened when they walk in the door and see it displayed on the wall.

Can you imagine if Ferguson Municipal Public Library had hate groups that used their library rooms? Especially if they were meeting during the riots? There would be no way anyone from their community would step into the library. The message, "We're In This Together", would be hypocritical and meaningless if patrons felt like the library was allowing hate to meet and grow there. Thankfully, FMPL didn't do that and were able to bring community members together in a safe haven. That's what libraries are about.

And, lastly, probably the best example of libraries standing up for *all* patrons is when it comes to challenged books. We don't just bow to people's request to remove a book. We have a book challenge policy, explain our process and why that book is important (and why it was bought), and we don't give in to the pressure. Why wouldn't we give that same attention and thoughtfulness to our meeting rooms, too? Even ALA has noted that a "high percentage" of challenged books are titles with diverse content.

Library Workers Are Speaking Out

If you go on Twitter and follow the hashtag #NoHateALA, you will read lots of great points and arguments. We decided to amplify those voices below. Libraries are not neutral. We never were. Tim Hensley's thread is a harrowing account of how LIBRARIANS supported the Nazis. We have to do better.

"If a library allows charities, non-profits, and sports organizations to discuss their activities in library meeting rooms, then the library cannot exclude...hate groups from discussing their activities in the same facilities."https://t.co/KXTsJciqDm
— Tim Hensley (@geistweg) July 9, 2018

If you follow Tim Hensley's thread (who is a curator at the VA Holocaust Museum), you'll read a jarring account of how librarians helped the Nazis:

"This has me thinking about how librarians and archivists were complicit throughout the Nazi regime, beginning with subtle alignments:
1. Reshaped collections in support of Gleichschaltung,
2. Expelled Jews and anti-Nazi political opponents (following civil services decrees),
3. Provided access to records for Nazi racial policies,
4. Appraised and accessioned important books, manuscripts, and artwork “confiscated” from Jewish households,
5. Collected and “relocated” important collections from Polish archives to the German interior, and
6. Assisted in the looting and destruction of Jewish material culture.
Before any of those steps, state archivists arrived at their annual meeting in 1933 with multiple calls to conform to their new political climate.
“...the overwhelming success of the Germans was attributable to the fact that they had entered the war with a better filing system.” -- Ernst Posner"


If you follow the thread, @RowMyBoat makes some fabulous points, including:
1. "Oh, we'll let everyone come have their events!" If you have white supremacist, etc. events, you will soon find those are the only ones you have. Because everyone else stays the fuck away. Now you're the overtly white supremacist library, because only they come around, whoops.
2. See, here's the difference. All *people* are allowed at the library. The nazis can come to the library, too. Just, not as nazis with nazi ideas. They can come borrow a book or whatever. Same as anyone.
3. Not letting them have white supremacist meetings doesn't endanger their safety. Having, say, an Afro-Caribbean dance performance doesn't endanger a white supremacists safety. They won't like it, but they are still safe, as a person.


On the ALA & hate groups debate: Many hate groups are nativists. We can't in one stroke sympathize w/ hate groups & in another promote dignity & inclusion of immigrants, encourage newcomers to utilize our facilities & resources, and proclaim that librarians are allies #NoHateALA
— Ana Ndumu (@AnaNdumu) July 11, 2018

If you follow the thread, Ana Ndumu continues:
1. Consider also the library staff who themselves are immigrants and refugees. What does this do for staff morale, let alone safety?
2. Here's the thing with bonafide hate groups (I'm aware that the label "hate group" is weaponized): once they make themselves at home in your space, they begin to question why other people are there. Think "inch/yard"
3. Finally, it was silly for ALA to classify conservative and/or religious groups with hate groups. Lends itself to conflation. Bottom line: embracing hate groups who verbally and physically attack entire classes of people is, well, dangerous.


Libraries are not neutral. A choice to accept hate groups is a choice to alienate the subjects of the hate groups, and that is not neutral. And if you’re making choices, don’t choose hate. If you choose to allow hate, don’t hide behind neutrality. Excellent THREAD in the RT. https://t.co/TyTMX82kbt
— Thomas Peach (@ThomasPeachLib) July 9, 2018

I love that line: "If you are making choices, don't choose hate." Exactly!

Melissa Hubbard's thread goes on to explain about book challenges and how ALA supports the library:

1. When a user says, "you should remove books with LGBTQ content because they're immoral," we don't just do it. Nor do we throw up our hands and say, "if any books are in the collection, then all books must in the collection."

2. We craft a reasoned and supported argument to justify our collection development decisions. We can do the same when making a determination that allowing a hate group to meet in the library constitutes a threat to user safety. ALA could support our professional judgement here.


All we do by letting them into our space to organize and recruit is amplify and legitimize them. This isn't about free speech; we don't allow violent threats in our spaces and we shouldn't start allowing them.
— Tyler Vachon (@tylervachoff) July 12, 2018

Again, if we don't allow what is being said behind closed doors to be said in the middle in the library in front of all patrons, then perhaps it shouldn't be at the library at all.


Sb’s freedom of speech is a matter of words ONLY IF u do NOT belong to a group targeted/threatened yourself. If u do, #holocaust also began w/ hate speech, remember? Everyone is equal to one another EXCEPT those who claim to be superior & have right to rule others. #NoHateALA https://t.co/CxWODdzXMY
— Bohyun Kim (@bohyunkim) July 11, 2018

Great points. And again, refer to the first tweeter, Tim Hensley, who laid out how librarians participated in the Holocaust. Now is the time to stand up and do something. We can't let history repeat itself.

What can you do?

From the way I see it, there are four actions you can do in response to this:

The BEST thing to do to make a difference re: this interpretation of the Library Bill of Rights is to join the Intellectual Freedom Round Table (of ALA) and work to CHANGE it. https://t.co/FLgQyehNAB
— Danica (@Dejase) July 10, 2018

1. If you want to have direct involvement, there is nothing better than joining the IFRT.

If you still haven't emailed ALA President Garcia-Febo or OIF, @beastlibrarian has created this handy Google doc where you can *easily* cut and paste a letter to send. https://t.co/wwd285YjOJ
— 👁️Nope👁️ (@MagpieLibrarian) July 10, 2018

2. Madison (@Beastlibrarian) put together a great template to reach out to ALA. Even if you are a library worker but not an ALA member, you are encouraged to still send a letter. ALA is for everyone, member or not.

4. I would also like to throw out a fourth option. I know ALA's stance doesn't have to be accepted by any library. So, I'd like to propose that everyone go back and examine their meeting room policy. Are you happy with the wording? Should you include more? We don't want to censor free speech, of course, but I do think it is important that it includes wording which protects the safety of patrons and staff. Now is a good time to do so.
Posted by Jess at 7:00 AM