Welcome to our series, "Ready to Go! Book Display." Once a month we'll highlight the latest or greatest for every age group that you can promote within your library or order for your collection. This month we are featuring titles relating to the #metoo movement. Drawing on her own experience, her research, her work with hundreds of survivors as the head of a rape crisis center in Boston, and three decades of grappling with the issue as a feminist intellectual and writer, Abdulali examines the contemporary discourse about rape and rape culture, questioning our assumptions and asking how we want to raise the next generation. Not That Bad: Dispatched from Rape Culture edited by Roxane Gay (May 2018)

Roxane Gay collects original and previously published pieces that address what it means to live in a world where women have to measure the harassment, violence, and aggression they face, and where they are "routinely second-guessed, blown off, discredited, denigrated, besmirched, belittled, patronized, mocked, shamed, gaslit, insulted, bullied" for speaking out. I Will Find You: A Reporter Investigates the Life of the Man Who Raped Her by Joanna Connors (Apr 2016)

Setting out to uncover the story of her attacker, Connors embarked on a journey to find out who he was, where he came from, who his friends were and what his life was like. What she discovers stretches beyond one violent man's story and back into her own, interweaving a narrative about strength and survival with one about rape culture and violence in America. Through image and text Una asks what it means to grow up in a society in which male violence goes unpunished and unquestioned. With the benefit of hindsight Una explores her experiences, wonders if anything has really changed and challenges a global culture that demands that the victims of violence pay its cost. Missoula: Rape and the Justice System in a College Town by Jon Krakauer (Apr 2015)

In Missoula, Krakauer chronicles the searing experiences of several women in Missoula - the nights when they were raped; their fear and self-doubt in the aftermath; the way they were treated by the police, prosecutors, defense attorneys; the public vilification and private anguish; their bravery in pushing forward and what it cost them. It started with an article and grew into a movement. #MeToo was born in the wake of a Pulitzer-prize winning New York Times investigative report on producer Harvey Weinstein's habitual sexual harassment of young women. The hashtag empowered women around the world to share their stories of sexual assault and abuse. Asking For It: The Alarming Rise of Rape Culture -- And What We Can Do About It by Kate Harding (Aug 2015)

Kate Harding combines research with an in-your-face voice to make the case that twenty-first century America supports rapists more effectively than victims. Harding offers suggestions for how we, as a society, can take sexual violence much more seriously without compromising the rights of the accused. Each year in the United States nearly three hundred thousand people are sexually assaulted. New practices by police, prosecutors, nurses, and rape crisis professionals are resulting in more humane and compassionate treatment of victims, and more aggressive pursuit and prosecution of persecutors. Based on seven years of in-depth interviews in Cleveland, Detriot, Memphis, and other cities, Johnston presents the people behind these new approaches and provides a template for organizations and communities to follow. Although they have different backgrounds, Midwesterner Megan Mazeros and Lauren Mabrey, the daughter of a Senator, are close college friends, but the relationship becomes complicated when Megan is the victim of sexual assault at Lauren's summer vacation home. A traumatic event near the end of the summer has a devastating effect on Melinda's freshman year in high school. 
At cheerleading camp, Hermione is drugged and raped, but she is not sure whether it was one of her teammates or a boy on another team - and in the aftermath she has to deal with the rumors in her small Ontario town, the often awkward reaction of her classmates, the rejection of her boyfriend, the discovery that her best friend, Polly, is gay, and above all the need to remember what happened so that the guilty boy can be brought to justice. Asking For It is a powerful story about the devastating effects of rape and public shaming, told through the awful experience of a young woman whose life is changed forever by an act of violence. This book is a collection of poems, essays, letters, vignettes and interviews written by a diverse group of impressive adults who survived sexual violence as children. Structured to incorporate creative writing to engage the reader and informative interviews to dig for context, this anthology is a valuable resource of hope, grit and honest conversation that will help teens tackle the topic of sexual violence, upend stigma and maintain hope for a better future. I Have the Right To: A High School Survivor's Story of Sexual Assault, Justice and Hope by Chessy Prout (Mar 2018)

The numbers are staggering: nearly one in five girls ages fourteen to seventeen have been the victim of a sexual assault or attempted sexual assault. This is the true story of one of those girls. The Sexual Trauma Workbook for Teen Girls: A Guide to Recovery from Sexual Assault & Abuse by Raychelle Cassada Lohmann (Jun 2016)

This book offers healing, real-life stories from survivors and powerful, evidence-based tools to help you reclaim your life after sexual abuse or trauma. After being assaulted by the sheriff's son, Kellan Turner, Romy Grey was branded a liar and bullied by former friends, finding refuge only in the diner where she works outside of town, but when a girl with ties to both Romy and Kellan goes missing and news of him assaulting another girl gets out, Romy must decide whether to speak out again or risk having more girls hurt. Deep Dark Blue: A Memoir of Survival by Polo Tate (May 2018)

A YA memoir of sexual abuse in the Air Force academy, and the author's survival and healing. What Does Consent Really Mean? by Pete Wallis and Thalia Wallis (Nov 2017)

Following the sexual assault of a classmate, a group of teenage girls find themselves discussing the term consent, what it actually means for them in their current relationships, and how they act and make decisions with peer influence. Joined by their male friends who offer another perspective, this rich graphic novel uncovers the need for more informed conversations with young people around consent and healthy relationships. Through age-appropriate illustrations and engaging text this book will teach children crucial and empowering skills in personal body safety. 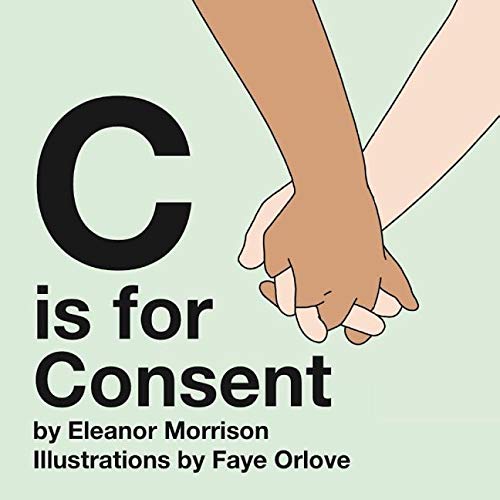 Finn navigates a gathering of relatives and friends. His parents encourage him to make his own choices about whether to receive and offer physical affection. That Uh-Oh Feeling: A Story about Touch by Kathryn Cole (Apr 2016)

Claire is feeling uncomfortable about the attention her soccer coach is giving her. Too much flattery and too much contact give her that uh-oh feeling. By seeking help from others and talking about her feelings, the situation is resolved happily. No Means No!: Teaching Children about Personal Boundaries, Respect and Consent by Jayneen Sanders (Jun 2017)

A children's picture book about an empowered little girl who has a very strong and clear voice in all issues, especially those relating to her body and personal boundaries. A young girl tries to help her friend learn that everyone deserves to be treated with respect.