4 Unknown Factors Behind the Bestseller Lists

For many people, when they hear a book is on a bestseller list, they assume just one thing: That book sold the most copies. That assumption, however, would be incorrect. 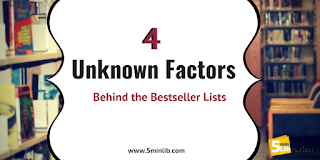 I highly recommend you read the article in the Observer, but if not, I wanted to pull out a few points that I think every librarian should know. It turns out that, in addition to being a top seller, there are four factors that greatly influence these lists:

1. The sold numbers is only collected from a limited number of sources.

The New York Times gets their numbers from select booksellers across the United States, not all sellers. People aren't suppose to know what stores are participating, but if you call the store and ask directly, they will tell you if they report back to the NYT or not. (Which leads into the problem stated in #3.)

The Wall Street Journal gets their numbers from Neilson's BookScan, which doesn't cover 25-15% of the book selling market.

The editors from the NYT evaluate their bestselling list and decide which books make the cut, and which ones don't. And some big books were excluded from this list, like William Blatty's novel The Exorcist. It eventually made it onto the list once, but it was a bestseller for many weeks. Hugh Howey's Dust sold more than 50,000 copies but was listed at #7, much lower than other books on the list who had sold less copies.

3. Bulk purchases can change the game.

NYT tries to prevent people from buying their way onto the list. Any bulk purchase is flagged and not included in the numbers. However, there is a cutoff point of how many books are considered a bulk purchase (80 for independent stores). The YA author I mentioned above did use bulk purchases -- but she bought just 79 so she wouldn't be recorded as a "bulk" buy. Other bestsellers have used book laundering firms to do this dirty work for them.

4. People with money can still buy their way onto the list.

As was pointed out in the Observer, one author spent big money advertising his own book, hired people to buy it all across the US, and succeeded on making the list -- for one week. It was worth it to him -- he can forever call himself as a New York Times bestselling author -- and it may explain why odd selections have made the list.

So, what does this mean for librarians? Should we ignore bestseller lists?

No, they are still important. Many patrons do pay attention to bestselling lists and will want to check these books out. However, if you do find the bestsellers aren't circulating at your library (besides the books from the obvious popular authors), this may explain why!

Find this interesting and want to read more? Here are more articles!
The convoluted world of best-seller lists, explained
Scientists Decode What Makes a New York Times Bestseller
How To Get On The NY Times & Every Other Bestseller Book List
Posted by Jess at 8:00 AM